The true purpose of Machu Picchu

What was Machu Picchu for?

Was Machu Picchu the final retreat of the Incas, the royal spa or the place of public worship? Completely, this great enigma about the Inca city will probably never be solved. The discoverer Hiram Bingham has always believed that Machu Picchu was the last legendary capital of the once powerful empire, the final withdrawal of the Incas from the Spanish conquerors. Since then, the historical and archaeological findings seem to have refuted this thesis, but the scientists are not united. We present the most probable and daring theses about the origin of Machu Picchu.

Machu Picchu as the “wrong” Vilcabamba

Hiram Bingham, the scientific discoverer of Machu Picchu, had traveled to Peru to find Vilcabamaba, the legendary last capital of the Inca already weakened by the Spaniards. When Bingham met Machu Picchu, he was not immediately convinced that he was at the end of his search. In 1911, Bingham initially suspected the birthplace of the Inca culture in the Inca city. Later, after analyzing the place and its artifacts, he reviewed this view. Now it seemed more likely to him that Machu Picchu was really Vilcabamba la Vieja. Everything seemed to fit: difficult accessibility, size, variety of possible uses.

In fact, this thesis was still in Bingham’s life as a mistake. Machu Picchu is too close to the original Inca capital Cuzco; and although its architecture is spacious and elaborate, the site can comfortably accommodate about 600 people. 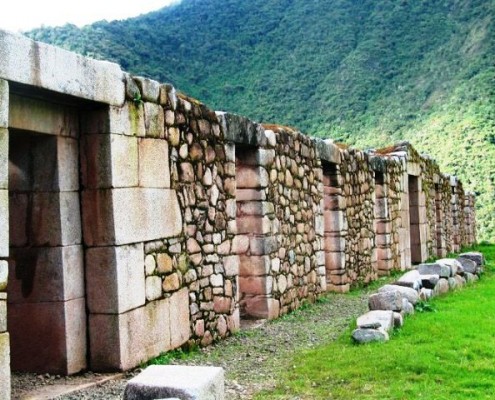 Meanwhile, the real Vilcabamaba is also found. It is located in Espiritu Pampa, near the tropical forest, about 130 kilometers west of the Inca capital, Cuzco. Ironically, Bingham had visited the ruins of Vilcabamaba in 1911. He decided, however, that the approximately 20 visible buildings were too small and spectacular to serve as a center. Subsequent excavations in the 1960s and extensive cartographic analysis in the 1980s, however, revealed that the entire site, with 400 to 500 buildings, was much larger than the discoverer had originally supposed.

Bingham and his team found a series of human skeletons at Machu Picchu, which they sent to the United States for further investigation. There they were examined by George Eaton, who at the beginning of the 20th century came to the conclusion that the remains were almost exclusively female bones. Bingham then formulated a third theory for the purpose of Machu Picchu. The site could have served, he said, as a place of ceremonial worship for the “virgins of the sun” – girls and women chosen, who dedicated themselves to the intaglio of the sun, Inti. 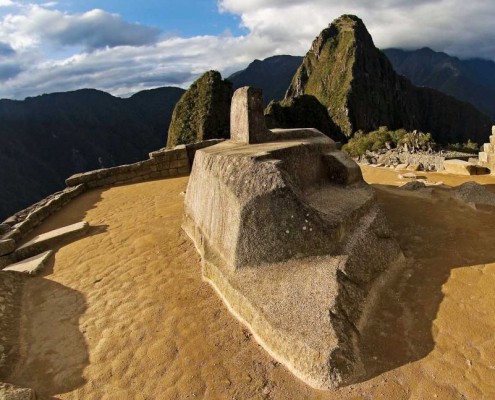 The Quechua Aclla Cuna or Aklya Kona lived under the tutelage of the Mama Cradle during the Inca Empire in celibacy within the temple complexes. They prepared ritual meals, kept the sacred fire and made vestments for the ruler and ritual purposes. At the beginning of the 16th century, the Spanish conquerors found thousands of Aklya Kona who, at the age of eight to ten, were selected in villages throughout the Inca Empire for their beauty and were taken to the temples that were not allowed to leave for a maximum of seven years.

Solar observation and worship were a high priority in Machu Picchu; Not least, the Sunstone Init Watana is the most majestic point of the entire complex. However, the complete theory finally collapsed in 2000, when a Yale investigator re-examined skeletal remains. They were, it turned out, by no means all women. Instead, there were as many men as women among them, whom Eaton had considered feminine only because of the unusually small bones of the Incas. Meanwhile, it is believed that the skeletons are the remains of the servants and assistants who came from all over the empire due to the true purpose of Machu Picchu.

Machu Picchu as a summer residence

In 1980, historians found a document of 1568, less than 40 years after the Spanish conquest of Peru. It is a request of the descendants of the Inca ruler Pachacutec Inca Yupanqui and is addressed to the Spanish Court of Justice. He claims that Yupanqui owned land in a place called Picchu, very close to Machu Picchu today. 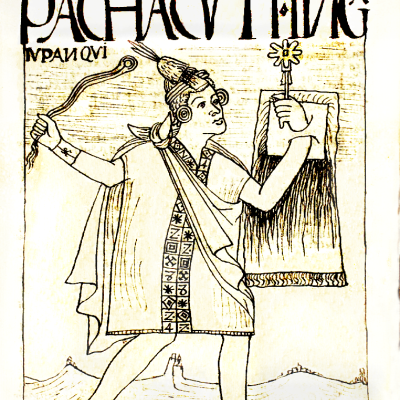 The subsequent analysis of the architecture of Machu Picchu and the artifacts found there (from simple pots to opulent brass mirrors) also indicate that Machu Picchu may have been a mountain site of the Inca rule, a plant of every conceivable comfort, including bathrooms private stone. Beautiful tableware and orchid gardens carefully designed to relax.

In fact, this interpretation fits in with the lifestyle of the Pachacútec Yupanqui (in Quechua it is cited “Pachakutiq Yupanki” or “Cusi Yupanqui” or “Kusi Yupanki”, always called “world changer”), the ninth ruler of the Inca Empire from 1438 to 1471 was a very successful army commander. Machu Picchu could have created around 1450 as a personal retreat. The remote location and the unusually challenging architecture can also be explained by the successful efforts of Pachakutiq to significantly expand the infrastructure of the Inca empire and to test new technologies for construction as well. 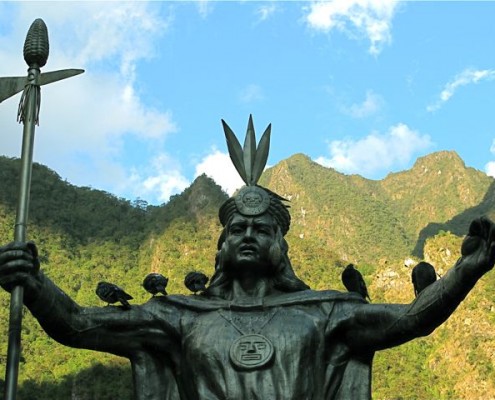 The professors of Yale University, Richard Burger and Lucy Salazar, even suggested in the 1980s that Machu Picchu was a mere summer residence for Pachacutec. Burger compared them in a much-cited analogy with Camp David, the weekend home of the US presidents. UU: a place where rest and discreet political meetings come together. Yupanqui not only housed his family, but most likely a whole team of other ‘aristocrats’, officials and public officials in Machu Picchu, not to mention the required servers. This ‘Panaca’ served the ruler for weeks or months, but he also provided political services.

This thesis would also explain the ordered removal of Machu Picchu, which did not involve any destruction or violence. Because when the Inca ruler died a hundred years before the Spaniards arrived, even Machu Picchu could have lost its meaning and been forgotten. In the Inca culture, it was a well-known phenomenon that the ruling houses were not transmitted, but that they were left empty when their inhabitants died.

Machu Picchu as a mythological place of pilgrimage

In the last thirty years, however, academic voices have been raised that, while correct, do not complete this explanatory approach. On the one hand, positioning yourself on a ridge is simply too symbolic for a people who worshiped mountains as gods to not include a spiritual component. 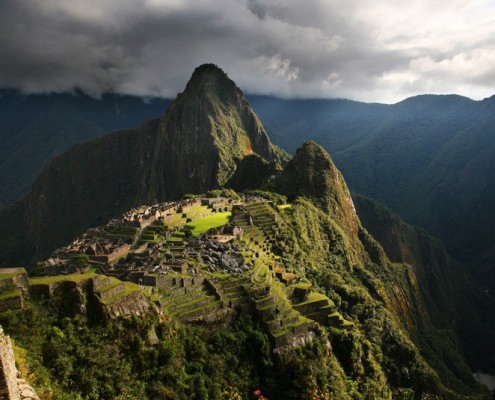 Machu Picchu could have been literally a “sacred center” in the middle of the Andes, since the sacred peaks, ‘Apus’ in Quechua, are around the city in all directions. Not only that, but the Urubamba River, so important for Inca cosmology, meanders like a protective band around the base of the mountain on which Machu Picchu was built.

In addition, conspicuously many of the buildings in Macchu Picchu are dedicated to ceremonial and sacred rites. The Incas worshiped nature as a whole and in particular the sun. Seen from above, it quickly becomes clear how perfectly Machu Picchu is embedded in its natural environment and how sensitive architecture is in response to its environment. 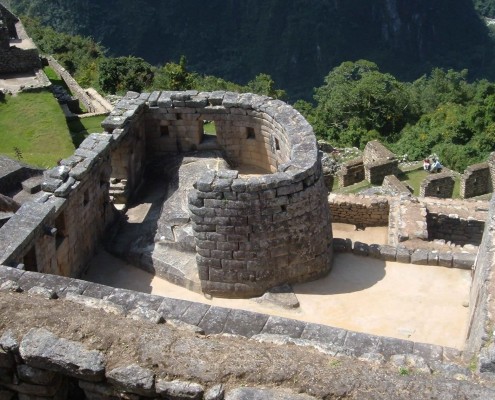 The sun temple in Machu Picchu

During the solstice of June, the sun rises directly on a summit in the east of Machu Picchu. She shoots a ray of light through a window of the spectacular semicircular sun temple, where it represents a perfect rectangle. Some archaeologists believe that the Piedra del Sol used to house a golden statue of the Pachacútec ruler.

In this context, the famous Inca Trail is interpreted as a pilgrimage, which should give all the Incas the opportunity to participate in the ceremonial festivals of Machu Picchu. It could symbolize the journey of the Inca ancestors from Lake Titikaka in Bolivia to the future capital, Cuzco. According to this interpretation, Machu Picchu would have been a public place of worship and a place of cosmological worship.

Or a combination of everything?

Until recently, almost all historical, archaeological and ethnological explanations for the purpose of Machu Picchu have been based either on a pragmatic or a spiritual approach. Currently, there is a growing belief that these two purposes may have existed side by side within Machu Picchu. The Inca do not distinguish between church and state; Her religion was holistic and emphasized the integration of heaven and earth, nature and man. In addition, every Inca ruler was sacred at the same time – and his residential and governmental place was sanctified by his pure presence.

Surely we will never know what Machu Picchu was originally built for and what purpose it served throughout its history. But every visitor is immediately mesmerized by the mysterious, spiritual presence of the buildings and the breathtaking location of Machu Picchu, making this Inca ruin still look like a natural cathedral.