The pyramids of El Brujo and the Señora de Cao 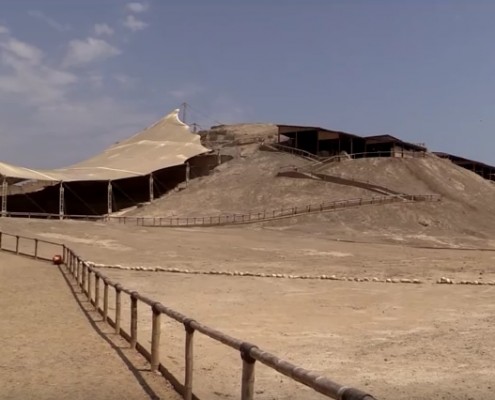 Not far from the coastal town of Trujillo, there is an archaeological site dating back to the Moche period, which at first glance may seem rather unspectacular, but hides its true treasures inside: the pyramids (or huacas) of El Brujo – and the remains of the only ones female leader from this era.

The El Brujo complex contains remnants of the Moche culture, as well as other, later cultures. If one comes to the excavation site, one does not see anything special at first. That’s because the Moche built their buildings and pyramids out of mud bricks – and of course, thanks to El Nino and other forces of nature, they literally melted away in the truest sense of the word.

But at the same time, the remains have laid down like a protective layer over the constructions, which are surprisingly well preserved. However, the upper levels – especially the Huaca El Brujo and the even older Huaca Cao Viejo – were cleared out by grave robbers. But they have also left all sorts of artifacts that are being carried back piece by piece to the surface and into the memory of humanity.

The temple wall of Cao Viejo rises over 5 floors above the ceremonial plaza in the center. The murals and reliefs depict warriors and naked, captive prisoners, human sacrifices and other gruesome scenes. From this, archaeologists conclude that the Huaca Cao Vieho was used exclusively for rituals. 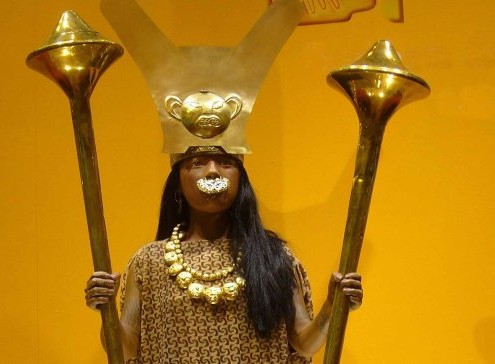 But the real surprise awaited the researchers when they opened an ornately decorated burial chamber in 2006: inside was the mummy of a 4th-century Moche ruler – and the mummy was female!

This was a sensation insofar as it was thought to date that the Moche culture was strictly patriarchal and led by men. The mummy gained some fame when renowned TV channel National Geographic released a documentary about it. So in the light of the public, even a replica of the mummy on a trip around the world and could be peer reviewed by interested people around the globe.

The original is exhibited in the small museum at the foot of the pyramid. Both the museum and the burial chamber in El Brujo can be visited, along with numerous artifacts, jewelery and precious textiles.

The Sorcerer’s pyramids are about 45 minutes north of the coastal city of Trujillo. If you arrive from the capital Lima, you can jump on the plane (the flight time is approximately 55 minutes) or take a bus on the Panamericana. The distance between Trujillo and Lima is 557 kilometers, the bus trip lasts from 7 to 8 hours.

When you arrive in Trujillo, you must book a guided tour to visit Huacas El Brujo. This is best done in the Historic Center, the historic old town of Trujillo. With a guide in Spanish, the tour costs around 30-50 soles, including the bus ride, tour of the area and visit to the museum. If you want an English-speaking guide, you can add another 30 soles.

If you want to explore the complex on your own, pay 10, – entrance of suns, here you can reserve a guide spontaneously.