The South of Peru 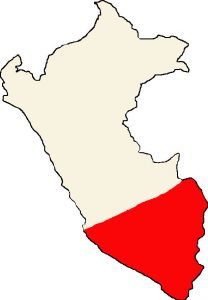 Maybe the south of Peru may not seem very tempting at first sight, but south of Lima some of the historical and scenic most important attractions of the country are waiting. Although the south consists mostly of barren deserts, some jewels are hidden here,

Starting with the mysterious Nazca lines, that stretch over kilometres through the Peruvian desert and whose meaning remains a mystery to this day. The best known are of course the forms like the astronaut (who looks surprisingly like a “home telephoning TV alien”!), the spider and the hummingbird – but there are hundreds of these mysterious lines in the sand, recently uncovered by a sandstorm!

Ica on the other hand, gives you a break from all the sand, because this oasis is one of the most famous wine-growing areas not only of Peru, but of all South America. Here you will find countless small wineries and wineries – so-called Bodegas – where you can feast on the delicious wines and of course the national drink Pisco. By the way, it is most beautiful here from February to early April, when the grape harvest is due!

Further east in the Andes lies one of Peru’s biggest tourist attractions: the legendary Machu Picchu, the ancient ruined city of the Incas from the 15th century. This complex deep in the Andes has managed to remain hidden for centuries, even though it was home to over 1,000 inhabitants at its weddings. Around Machu Picchu there are numerous other smaller Inca sites, which make every archaeologist’s heart beat faster. And of course there is the charming city of Cusco, about 75 km away from Machu Picchu, which is the perfect starting point for excursions to the higher Andes.

Nestled in a fertile valley between mountains and the desert is the most beautiful city in Peru, Arequipa, a unique example of colonial architecture. The Arequipeños are extremely proud of their city, which today is considered the intellectual centre of Peru.

Ayacucho – better known among locals as Huamanga – is a center for religious celebrations. No wonder, because the city bears the sonorous name “the city of 33 churches”, one for every year of Jesus’ life. But long before the Spaniards invaded, the area was inhabited: about 25 km north of Ayucucho, 15,000 year old human settlements were found in Pikimachay. From 500 – 900 lived here the Wari culture blossomed, a predecessor of the Inca. Also the Chanka and Nazca lived here, before the Inka “took over” the area. A true potpourri of lesser known but no less interesting historical sites!

In the deep south of Peru lies Moqugua, a tranquil city, which is characterized above all by the many historical sites of different pre-Inca cultures and the beautiful landscape. From the remains of the Wari culture to Tiwanaku sites (by the way, the only region where both can be found!), from the Chiribaya culture to the Inca, there is plenty to see!

And of course there is Lake Titicaca in the southwest, which belongs to both Peru and Bolivia and is 15 times as big as Lake Constance. With its picturesque islands Taquile and Amantani and of course the legendary floating islands of the Uru, it is one of the most popular holiday destinations in the south of Peru, even if the water is extremely cold and not very clean.

Last but not least are in the south the Colca-Tal, the Valley of Volcanoes, the Nacional Salinas and Aguada Blanca.

You see, Peru’s south is full of treasures just waiting to be visited by you!

Destinations in the South of Peru

Discover the most beautiful destinations in the south of Peru. From the desert to the jungle.