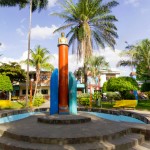 The San Martin region of northern Peru encompasses a wide variety of landscape types: from the wild Amazon jungle to rugged mountains, from crystal clear lakes to powerful waterfalls, San Martin is one of the most picturesque regions of Peru.

So beautiful, in fact, that the Rio Abiseo Park was declared by UNESCO not only a cultural heritage, but also a world landscape patrimony. In addition to the vegetation, there are also the numerous cultural remains of cultures lost long ago that attract more and more tourists on their trips to San Martin in Peru.

Moyobamba, the city of orchids

The economic center of the San Martin region is undoubtedly the largest city in the Tarapoto area. The capital, however, is Moyobamba, and has existed since the foundation of the region in 1906. The quiet city has retained its original charm and impresses with its many green spaces. The exuberant vegetation also dominates around Moyobamba: more than 3,500 different species of orchids are native to this region and bloom in all conceivable colors, hence the epithet “City of Orchids”. A beautiful collection of orchids in their natural habitat can be found in the Botanical Garden of San Francisco and in the “Garden Centers” in Jr. Reyes Guerra 900.

Moyobamba is home to a relatively large community of Germans and Armenians of Jewish faith who actively participate in the cultural and humanitarian affairs of the city.

Each year, on June 24, the “Moyobambinos” celebrate their patron saint, San Juan. Music at full volume, all kinds of goodies and the “Pandilla” dance make the festival an important event in the city, which also attracts many visitors from abroad.

The sunset in Moyobamba should be better enjoyed in the “Las Puntas”. These observation platforms not only offer incredible views of the city, but also the magnificent scenery.

During the rainy season from December to March, the roads in Moyobamba and its surroundings are often difficult to navigate due to landslides. This is problematic because the city is an important center for traffic to the Andes. But the inhabitants know how to help and then resort to the cars pulled by donkeys, horses and the Company.

A tour in the Rio Abiseo National Park

The Río Abiseo National Park has been declared a World Heritage Site by UNESCO for 25 years. Not only is the area of ​​almost 3,000 km a refuge for many animals in danger of extinction, but it is also possible to trace more than 30 pre-Columbian archaeological sites. The advantage for the “usual suspects” like Machu Pichu? Guaranteed to take pictures where no other tourist from Peru appears in the background! 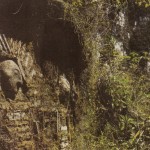 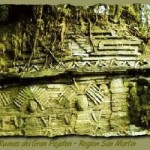 ruins-gran-pajate The most significant site is, without a doubt, the “Gran Pajaten” between the Huallaga and the Marañón River. On a hill there is a complete system of terraces, which is attributed to the Chachapoyas culture. However, there are indications that in this area already 200 a. C. They must have found human settlements.

Ancient mosaics and stone reliefs, which adorn some of the buildings that are still preserved, mostly show geometric patterns and birds. The cloud forests have partially recaptured their territory, so not only is there a unique mystical atmosphere, but you will also find excellent photographic opportunities.

In addition to the orchids, Moyobamba is also known for its picturesque waterfalls. The Paccha Waterfall is about 30 kilometers from the city, but due to the impassability of the area, the journey takes about 1.5 hours. The waterfall pours over three levels, each ending in a natural pool – perfect for a refreshing swim after about a 15-minute walk up.

The Lahuarpia waterfall is located 25 km south of the capital San Martins in the mountains Auarpias, the journey takes only half an hour plus a walk through the vegetation of about 20 minutes. The waterfall is smaller (the drop is about 12 m), but its better accessibility makes it the more popular of the two waterfalls.

The province of Lamas is about 25 KM from Tarapoto. Here you will find the “Castillo de Lamas”, an unusual sight in the middle of the Peruvian rainforest. Built by the Italian Nicola Felice, who, after building an earthquake, gave work and the province an attraction.

The castle is very well preserved, has two watchtowers and a swimming pool in the back of the castle.

How do you get there and where can you stay?

Moyobamba itself does not have an airport, but the much larger Tarapoto, which is served daily from Lima, the capital of Peru (the flight time is approximately 1 hour).

If you take the bus from Lima to Moyobamba, you have a distance of almost 1060 km in front of you. Buses usually leave at night and take about 20 hours to reach the San Martín area.

In San Martin you will find accommodations that are mostly simple but with unique details that will make your stay unforgettable. Like the “La Casa de mi Sueno Garden Lodge” 10 kilometers from Moyobambas. In the middle of a magnificent garden overlooking the Tahuishco River and the lake, you can relax. And if you want to do some exercise, you can swing the racket on the hotel’s tennis court. The night costs around 50, – Euro in a double room, breakfast, parking and wifi included.