Paracas – Where the desert meets the sea

A few hours south of Lima is Paracas, a small town, a peninsula, a bay, a nature reserve and once home to the pre-Inca culture of the same name. This little piece of paradise brings together many of the best places in Peru: the clear sea, the unspoiled nature with many protected wild animals, historical sites and a bit of the fascination of past cultures.

The Paracas Natural Reserve is formed by the Peninsula and Bahía de Paracas, as well as by the Ballestas Islands, a small archipelago off the coast. Although the sometimes sterile landscape makes it difficult to guess, this is a true paradise for animals: thousands of species of birds live here, including blue-footed boobies, pelicans and Humboldt penguins. But the visitors of our latitudes that whistle pass the cold winter in the house, more than in Paracas.

Paracas is located about 240 km from Lima. By car you need about 4.5 hours. The track can relax because the Panamericana is very well developed until shortly before Paracas.

Attractions in the place Paracas

Paracas is a typical coastal city that has gained immense popularity in recent years. There may not be as many attractions, but the incomparably relaxed atmosphere with many romantic restaurants right on the beach. But be careful, compared to other coastal places in Peru, prices in Paracas are quite “salty”.

Advice for those who take into account the prices: the restaurants parallel to the promenade may not have a direct view of the sea, but the options are cheaper. In addition, many of the restaurants have arranged “Menu of the Day”, request it before choosing something from the menu a la carte, much more expensive.

The beach of Paracas is quite beautiful, but also very narrow and rocky. If you continue for a while, you will arrive at the public beach in front of the Hilton Hotel. Here the beach is much more pleasant and invites you to spend a quiet day on the water, if it does not take you to the nature reserve.

The nature reserve of Paracas

The natural reserve of approximately 1440 km² of Paracas was founded in 1975 and includes the Paracas peninsula, the bay south of it and the current Ballestas Islands. Here you can ride your bike for miles along deserted beaches and observe the unique sights and wildlife. Mainly the birds that live here, also the sea lions, the South American sea lions and more than ten different species of dolphins are native here. According to legend, the national and general hero of Peruvian freedom, José de San Martín, landed here in 1820 during an expedition and fell asleep on the beach. When the

The eyes opened again, he was so fascinated by a flock of flamingos passing by in the sunset that he then designed for the first red and white Peruvian flag.

Once the “Cathedral of Paracas”, an extraordinary rock formation on the coast, attracted visitors as a symbol of the park. But in the devastating earthquake that shook Peru in 2007, it was completely destroyed and disappeared in the floods.

But another attraction has survived the earthquake and still dominates the sea: the huge rock painting on a hill, the Candelabra de Paracas or even “the candelabra”. The design strongly resembles the Nasca lines, which is not surprising. After all, according to the latest findings, half of them were created by members of the Paracas culture. The meaning of the candlestick remains a mystery. It should probably serve as a navigational landmark on the sterile coast.

The best way to see the rock carving is, of course, from the sea, in addition to me (h) r.

Tours through the nature reserve

In general, he says that there are two tours that are really worthwhile through the reserve: if you’re in shape, just rent a bike at the resort. That costs approximately 20 soles per day, but you must make sure that the suspensions and brakes are in good condition. Plan the route as soon as possible, because with the advance of the day, the wind on the coast is quite strong and, on the other hand, hardens much more! (It is more convenient to take a taxi or a taxi to Colectivo, which can be booked in the main square, but honestly, it is not even half as pleasant through the windows of the car).

The other option takes you to the sea: with about two hours of excursions to the Ballestas Islands, you will not only marvel at sea lions, penguins and other animals, but also, of course, the Paracas Candelabrum in all its splendor. The tours cost between 30 and 40 soles and start in the morning at 8.00 or 10.00 (the first tour should be more beautiful). As the trip can be quite fast and windy, you should have a windbreaker and a hat to protect you from the sun. 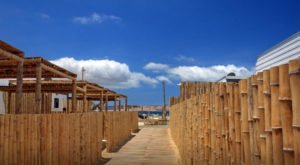 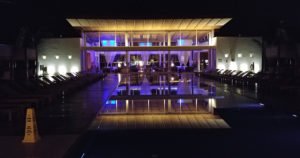 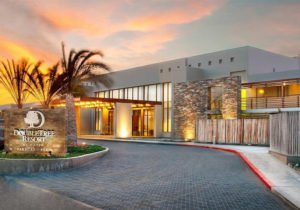 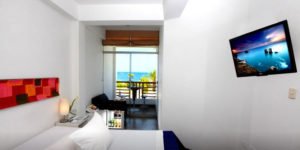 How to get to Paracas

Paracas is located 245 km from the Peruvian capital, Lima, 75 km from Ica and less than 200 km from Nazca. Of the three cities there are bus connections of the “safe” and “good” bus companies, such as ExcluCiva or Cruz del Sur. The journey from Lima to Paracas by bus takes approximately 4 hours.

You can also take the plane, from Lima to Pisco and from there by taxi or bus, but with boarding and the round trip to the airport is more or less at the same time and it is much more expensive and uncomfortable.

Visit the beach promenade in Paracas and dine in the restaurant “El Ancla”. You will get there one of the best Lomo Saltado.