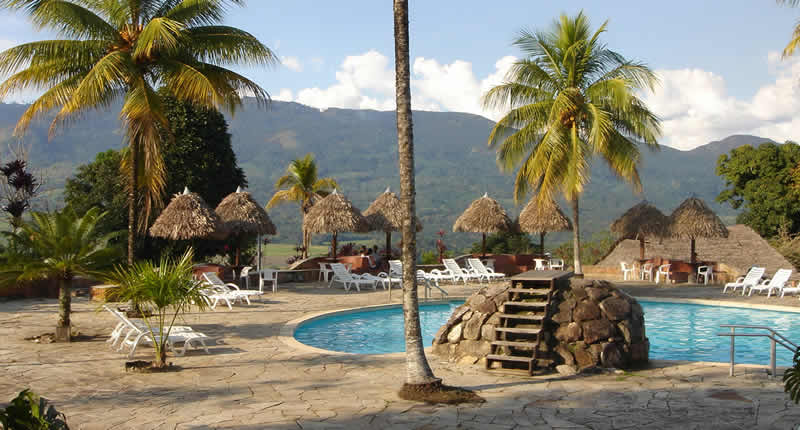 Moyobamba is one of the oldest cities in the Peruvian Amazon region. The fascinating story reflects a city in motion where many foreigners from all over the world have found a home.

The Spanish Don Juan Pérez de Guavara founded the city in 1540. Moyobamba is 860 meters above sea level, has a subtropical climate with an average annual temperature of around 24 degrees and is located on the western slope of the Andes. In December, the rainy season begins and ends in March. During this time, it may happen that the roads are only partially or not passable due to heavy rains.

With its 79,000 inhabitants, Moyobamba is the capital of the province of San Martín, located in the northeast of Peru. About Moyobamba leads one of the few roads from the Pacific to the Amazon basin. The nearby Tarapoto airport, which is about an hour and a half by car, attracts many tourists to Moyobamba. The city is located on a plateau on the Mayo River.

Moyobamba became known for the variety of orchids that grow in the jungle. Every year, at the end of October, the population celebrates the festival of orchids. With reason, in Moyobamba there are more than 3500 different orchids, more than anywhere else in the world. The beauty of these flowers, their exoticism and the fact that they are an important element in the ecological chain make Moyobamba an attractive tourist destination.

The Peruvian population is very close to nature and that is why it is not surprising that large areas are protected in the San Martín region.

Moyobamba remembers a long history. Long before the Spaniards founded Santiago de los Ocho de Moyobamba, the Chachapoyas settled in the Río Mayo area. Moyobamba is also known as the cradle of the Amazonian culture.

Legend has it that during the reign of Yawar Huaca (the weeping of blood), the Chancas and Pocras rebelled against the Inca Empire. Its Ancoalla and Astohuanca leaders took 50,000 people to the Moyobamba plain. On their way they crossed the Apurimac river and destroyed the bridge over the river, so the Inca could not follow those who fled. On the Mayo River they founded the Ancoalla village. Later, around 1447, the Inca Tupac Yupanqui sent his son to Ecuador today to consolidate and expand the Inca Empire. The inhabitants of Muyupampas and Chachapuyas did not want to submit to the rule of the Incas and fled to the region of Yaravi and Trapiche where they formed the Mayorunas.

Spanish captain Alonso de Alvarado led a group of 13 soldiers from Trujillo to Chachapoyas and Moyobamba. Among them was Juan Perez de Guevara, the later founder of Moyobamba, who took the lead after Alvarado had to return to Chachapoyas.

Moyobamba in the Age of Liberation

During four centuries, the Spanish domination lasted in which the natives were enslaved. In 1742, Atahualpa Apu-Inca (also known as Juan Santos Atahualpa) united several tribes of the Asháninka (People’s Brothers) and led an uprising against the Spaniards, which is said to have begun in Moyobamba. Atahualpa, who described himself as the descendant of the Inca kings, was educated as a Christian in Cuzco by the Jesuits. During this time he learned the languages Spanish, Latin and Quechua. It is said that he traveled to Spain, England, France, Italy and Angola with a Jesuit. The uprising secured the area of the Ashaninka for nearly 100 years.

Moyobamba and the republican era

The historical course of Moyobamba

After the time of the Spanish viceroyalty, Moyobamba became a city of tolerance and numerous minorities. In the course of history until 1870, several families of Ashkenazi Jews, Sephardic (Sephardic) Jews and the Shilicos settled in Moyobamba.

In 1853, numerous Austrian and German families joined Moyobamba for failed immigration programs in the central jungle. Between 1860 and 1880, many Chinese escaped the slavery of the Spaniards and brought the rice to Moyobamba.

In 1920, the Armenians arrived in Moyobamba fleeing the Turks, who committed the genocide of the Armenians. During the Second World War, Italian and English missionaries arrived with their families, including Annie Soper, who became a symbol of love and humanitarian work during the Ruhr epidemic and the smallpox epidemic that struck Moyobamba between 1921 and 1922.

In 1922, the city became the center of the guerrilla struggle at the time of the Cervantes Revolution, which cost many lives. During the rubber boom in which the city of Iquitos was founded, Moyobamba and other communities around the Huallaga river basin experienced a large influx of immigrants, which led to cultural, economic and social decline. The city grew from 44,000 inhabitants to just under 80,000 in 1940.

In the late 1940s, many refugees fleeing World War II flew over Lima to Moyobamba. Between 1967 and 1968, under the first presidency of Fernando Belaúne Terry, the Marginal Road of the Jungle, a national highway that was opened from Chiclayo in the Pacific, the until now isolated provinces of the north of the Amazon and San Marín.

In the 1970s, a new wave of refugees arrived in Moyobamba after President Juan Velasco Alvarado implemented an agrarian reform in favor of the former landowners.

As in 1987 in other parts of Peru, the spiral of violence worsened, so many refugees came to Moyobama saying that urban density grew very strong and that overpopulation could not be adequately addressed. Fortunately, despite the high problems involved, there was no social conflict.

At the end of May 1990, earthquakes in the Moyobamba area are reported repeatedly. The earthquakes of 1990 and 1991 contributed to the destruction of many historic buildings. 17 dead, 180 injured and 12,000 people homeless during the 1990 earthquake. The 1991 earthquake killed 11 people and left 20,000 homeless. The cause of the tremors is the Nazca plate that slips under the South American plate and therefore folds in the Andes mountains. Earthquakes in Moyobamba are on the Richter scale between 4.2 and 7.5.

In January 1993, the city experienced, for the first time in the history of Moyobamba, an attack by 1,000 heavily armed terrorists of the “Tupac Amaru Revolutionary Movement” (MRTA) who were trying to capture the city. The attack killed dozens of people, killed at least 6 terrorists, 9 policemen and 6 soldiers, and destroyed several bank branches, shopping centers and public facilities. In 1998, the last terrorist attack occurred, destroying electricity and masts.

The karma that surrounds Moyobamba, its population, the city and its nature, has led to the union of the population of the most diverse nations of our world. Moyobamba is open to newcomers, especially those who had to leave their own country in a situation that sometimes endangers life.

Plaza de Armas Location: city center The main attraction is a three-stage fountain that represents the beautiful women of the jungle.

Las Puntas or viewpoints Location: In the outskirts of the city Moyabamba.

Baños Termales de San Mateo Location: 4 km from the city of Moyobamba The thermal baths of San Mateo are known for their medicinal properties. Aguajales Renacal del Avisado Location: 20 km on paved road from Moyobamba. A humid and unique ecosystem due to its altitude (800 m).

The most beautiful orchids 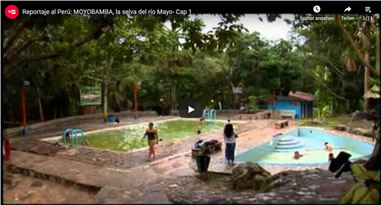