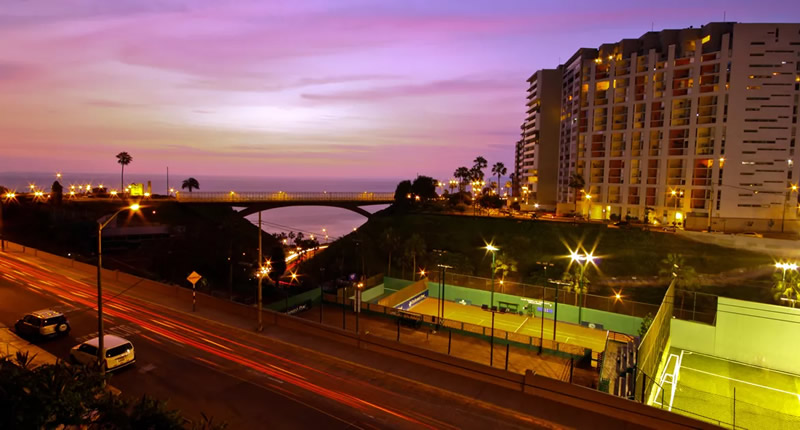 Miraflores – the district of the beautiful and wealthy in Lima

Probably the most popular area of ​​the Peruvian capital, Lima, Miraflores, attracts with its excellent restaurants, international hotels, colorful shops, beaches and the general style, so it is so unique in the rather gray Lima.

Here you can walk along well-kept avenues or watch the Flying Merchants at Kennedy Park, shop at luxury boutiques or major shopping malls, or try surfing and paragliding. Granted, everything in Miraflores is a bit more expensive than in the rest of the city, but the quaint surroundings and charm of this neighborhood make up for it.

Like many areas on the coast, the first settlers lived in Miraflores centuries ago. And yet, today only one historical site commemorates the pre-Columbian inhabitants, the Huaca Pucllana, a clay pyramid that has not yet been fully excavated and explored.

Shortly after Lima was founded by Francisco Pizarro in 1535, the Spaniards also settled in Miraflores. Over the years, Miraflores became increasingly the summer residence of the rich and a popular spa. In the saltpeter war, the “Battle of Miraflores” was won here against the Chilean aggressors, which earned Miraflores the epithet “Ciudad de los Héroes”, but did not change the fact that Lima fell the next day anyway .

Today, Miraflores is one of the most fashionable areas of Lima, the perfect balance between the new and the old: on the one hand, the colonial houses well preserved or restored, on the other hand ultramodern residential and commercial complexes and modern restaurants.

The most famous attraction is the Huaca Pucllana, a 6th-century temple complex that is the only pre-Hispanic building in the area. The huge area covers about 15 hectares and the excavation work continues even today – but what has already been explored, you can of course visit!

As is often the case, life in the neighborhood is centered around a place – in this case the Parque Kennedy, which is the old center. Here you can haggle with street vendors or have a romantic picnic. Next to it is the old church Virgen Miagrosa and the beautiful town hall of Miraflores.

Although most of Miraflores is separated from a cliff by the sea, the area has some beautiful sandy and pebble beaches that meander along the name of Costa Verde. Maybe you would like to take your first surf lesson here at the legendary surf club Waikiki, founded by Carlos Dogny after a trip to Hawaii? Or you plunge with the paraglider from the steep cliff in a death-defying way and experience a truly “breathtaking” flight over land and water due to the wind?

The largest shopping center in the area is the Centro Comercial Larcomar. Here you will find numerous shops, restaurants and even two clubs. Located on a hill overlooking the beach and if you want to eat here, a visit to the sunset is recommended, which is undoubtedly the most beautiful time here. Speaking of which, it is really romantic in Parque del Amor, which is nearby, and offers enchanting views of the beach and the sea!

If you are looking for Peruvian handicrafts, there are a number of colorful markets waiting for your visit. Along the Av. Petit Thouars, a short walk from Parque Kennedy, is full of shops and small markets. The best of these is Mercado Indio, where you’ll find a wide selection of handcrafted textiles, jewelry and more.

There are antiques along the Av. La Paz, and artwork by local artists can shoot you in the Parque Kennedy for (relatively) little money.

On the beach of Miraflores surfers often meet and there are various surf events organized. In the park next to Larcomar paragliders start almost daily, often gliding over the heads of visitors in the shopping center. Larcomar offers cafes, various restaurants, a cinema and a bowling alley.

Discover Lima from above with a paraglider. In the park Antonio Raimondi, which is located directly next to the Park of the Love (Parque del Armor), you have the opportunity to book a paragliding flight. The paragliding tandem flight takes place with a professionally trained and experienced paragliding pilot, so that you can enjoy the flight and the view over Lima to the fullest.

Miraflores and its parks

In Miraflores, many parks invite you to stay and relax. The parks are used throughout the year, even in winter. Here you will meet lovers in love who huddle together in a bank or groups sitting on the grass and participating in a variety of activities.

If you are lucky enough to live near one of these evergreen oases, you will enjoy it and appreciate it quickly. Especially in summer during the night, after a hot summer day, a walk relaxes the body and mind.

The parks, which are always well cared for, house not only a large number of birds, but also small populations of squirrels and provide nature to the 10 million metropolises, which otherwise would be largely dry.

How to get to Miraflores

From the airport you can easily get to Miraflores both by bus and taxi. Every 30 minutes, the Airport Express Lima stops seven different stops in Miraflores – with free WiFi during the ride!

The center is about 25 minutes away, and here too: at the prices it is almost worth taking a taxi! Miraflores is perfectly connected to the center via the Express Highway “Expresa”.

Our tip: make sure to make a short detour from Miraflores to the south of Barranco, the bohemian district of Lima! The best way to do this is to take the Circuito de la Plage de la Costa Verde, the circular route along the coast.

Spend the night there 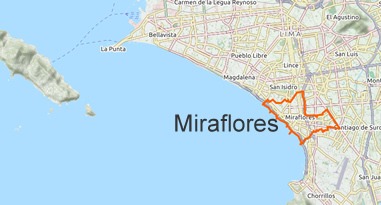 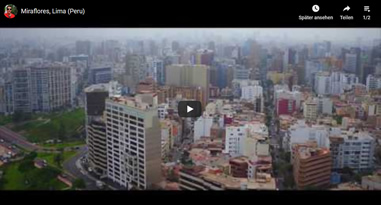