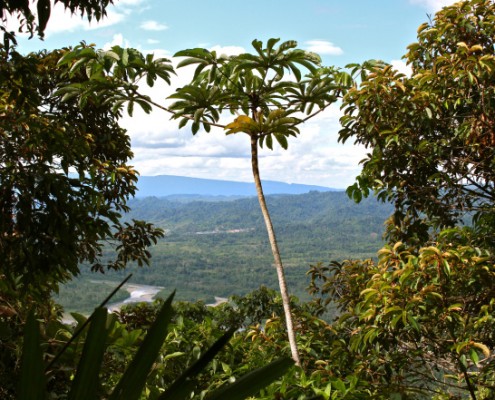 The Manu National Park (in Spanish Parque Nacional del Manu) east of Cuzco is a paradise of organic diversity. 15,000 species of flowers and plants thrive here. More than 1,000 of the world’s 9,700 bird species live in Manu National Park. In addition, more than 200 different mammal species – such as the famous giant otters, magnificent jaguars, tapirs, sloths, nocturnal monkeys, glorious bright butterflies – inhabit the area. We only speak of the species discovered so far! Every year new, previously unknown specimens are added. Some researchers even consider the Manu National Park to be the most biodiverse in the world.

This still-pristine region in the Peruvian Amazon, divided between the regions of Madre de Dios and Cusco, offers eco-tourists day-long breaks, surrounded by an incredibly diverse flora and fauna – not for nothing the park is one of the so-called hotspots, areas extreme biodiversity in the smallest space. Located in southeastern Peru, the unique organic reserve is far from civilization and still best reached by boat.

Although the Manu National Park covers an area of ​​18,812 square kilometers (for comparison: this corresponds to about half of Switzerland). However, only limited areas have been opened up for tourism to protect people, animals and plants living there. The rest of the area can develop free from external influences and is among other habitual habitat always settled here Amazon Indians. 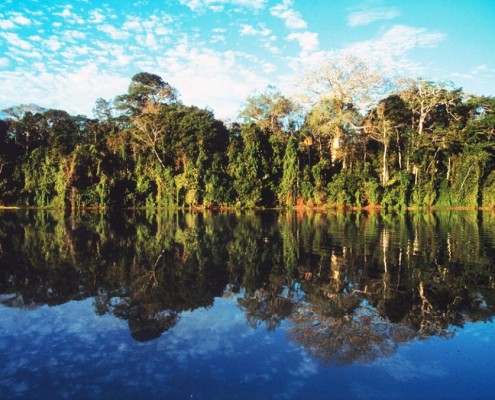 Habitat of the Amazon IndiansThe foundation of the National Park in 1973 put an end to the economic exploitation of the area through logging, commercial hunting and agriculture – all three are banned within the boundaries of the Manu National Park. As part of this, UNESCO declared the National Park a biosphere reserve; since 1987 he is also World Heritage Site.

Within the Manu National Park, lodges await visitors at different elevations. A number of carefully selected, licensed tour operators offer tours of one to several days in designated areas of the park, with priority given to preserving and respecting the natural environment. This sustainable travel concept, which is a prerequisite for a tour permit, leaves the plant and animal world of Manu National Park virtually untouched.

Three ecological zones – each a paradise 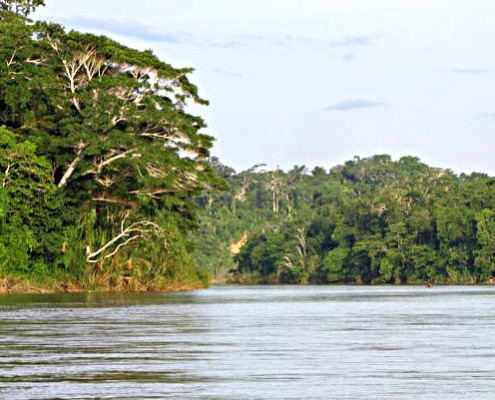 The height difference of 3,700 m divides the Manu National Park into three different ecological zones, the Andean Grassland (Puna), the Elven and Cloud Forest and the tropical rainforest. In addition, a further segmentation of the park area was defined in agreement with UNESCO, which is defined by the type of use. Since 1977, the Manu National Park has a core zone, a subsistence culture zone and a tourism or buffer zone. Core zone and buffer zone serve to preserve the autochthonous (always in the park resident) flora and fauna.

They also provide a habitat for a number of tribes of Indians in which they can preserve and live their culture (if desired) without contact with the outside world. A number of them, but probably not all, are known: the Machiguengas, the Yaminahuas, the Yora, the Mashco-Piros or the Amahuacas.

The locked core zone accounts for 81.5 percent of the total park area.
13.5 percent are reserved for the buffer zone, which allows eco-tourism and research projects. The remaining 5 percent may be populated with strict conditions, but are mostly reserved for the Indians as residents.

The inexhaustible flora and fauna of Manu National Park 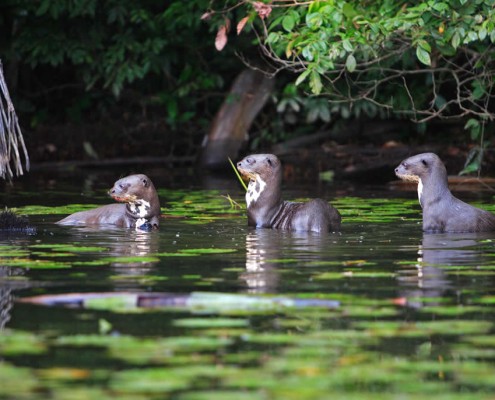 In the middle of the Manu National Park is the Cocha Cashu biological station of the University of La Molina, which, in cooperation with the Frankfurt zoo, captures the almost inexhaustible biodiversity of the reserve. It has the largest database of tropical ecosystems in South America, and its scientists estimate that about 10 percent of all plants in Manu National Park are still completely unknown in biology.

The same applies to the animal world: since the 1970s, more than 100 species of completely unknown bats have been discovered in the Manu National Park, which the attentive visitor can observe in flight at night. At the same time, the park is also an idyll for endangered species in other places, such as the giant otter or the black alligator. Therefore, the Manu National Park is also used for research purposes, how and how fast it can come in a closed by humans only under strict conditions or not editable, closed area to a recovery of biological balance.

The first thing that impresses almost all visitors is the exotic interaction of sounds, smells and unknown colors that the jungle brings. Then comes the overwhelming optic of the scale of the trees that grow in the Manu National Park. 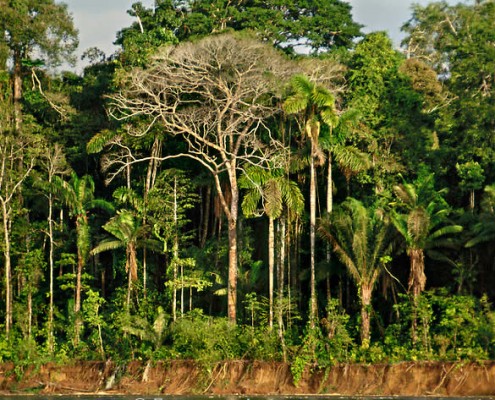 The rainforest in the Manu Park In the dense jungle the trees extend up to 60 meters high. Around its trunks, which extend up to 3 meters in diameter, the vines and vine plants of all kinds meander, obscuring the light that falls from above and produces the typical lush green twilight of the rainforest.

The mountainous jungle offers a variety of trees in the most varied forms of growth and immense vegetation. Lichen, mosses and ferns provide a living soil structure for insects and soil animals; An amazing variety of brilliant orchids surprises the eye. Bromeliads and epiphytes commonly found are also famous. 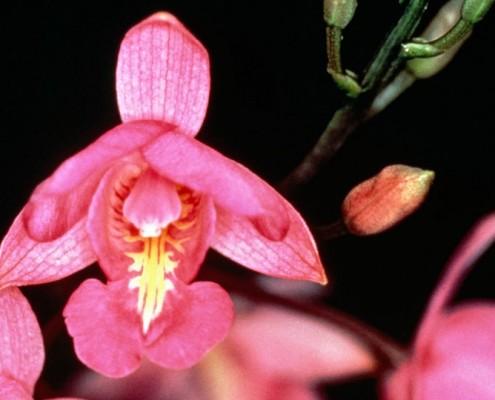 Orchids in the Manu Park The high mountains are flooded with light, with a sparsely populated forest landscape, dwarfed by dwarfed grass.

Of course, about 200 species of mammals do not always appear. Bears, monkeys and cats are especially present in the cloud forests of large mammals: Spectacled bears, anteaters, capuchin monkeys, woolly monkeys, nocturnal monkeys, pumas, jaguars and ocelots are often seen occasionally in this order. 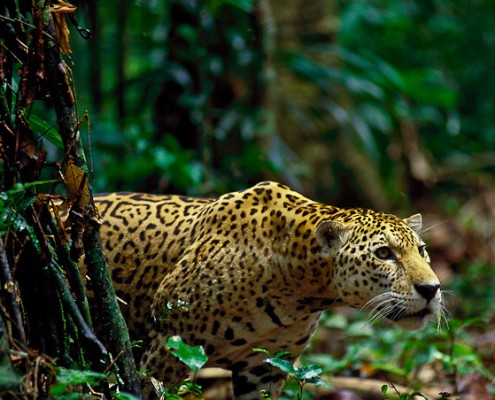 Jaguar and Puma are the main predators in the area. The Puma is geographically more extended: it rises from the lowlands to heights of more than 3,000 meters. On the contrary, the Jaguar generally remains below 1,000 meters. Over 1,700 meters of border there are also spectacled bears in danger of extinction.

Spectacled bears in the Parque del Manu In the lowland forests, smaller predators such as ocelots, coatis and tayras, short-eared foxes and giant otters are represented. The lowland tapir can also be seen here. In animals with hooves there are white-tailed deer, white-tailed deer, peccaries with a collar and white-tipped peccaries and swamp deer, although they are scary and, therefore, often can not be observed directly. The big anteater and the dwarf anteater, the giant armadillo, the lazy animals, the capybaras and the typical animals of the Andes, such as the Pakarana and the Paka, have a good view.

If larger mammals are going to take more time, the sight of colorful bird species looks completely like this. 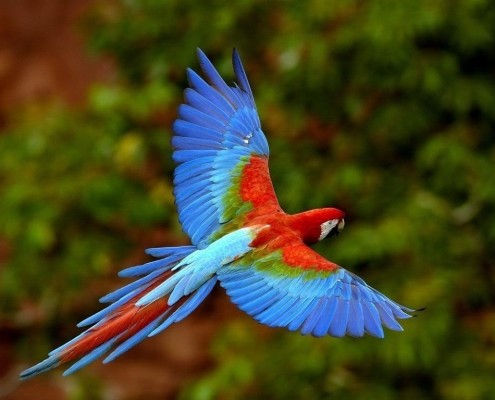 colorful species of birds in the Manu National Park, Allen is ahead of the famous Peruvian cock (“Cock of the Rock”), which impresses by its colorful and also for biologists, surprising dances of courtship. Other species of birds are the native parrots, as well as the quetzal, tangar, trogon or oriole. The so-called avifauna (the totality of all that occur in a region of bird species) also includes Edeltangare, toucans, tree climbers, hummingbirds, the black-headed ornamental bird and the red-fronted anteater.

A particularly impressive and otherwise rare species is the Andean cliff bird. Incidentally, even North American shorebirds use the banks of the Amazon River to take a break on their flight back home after winter, which has already caused confusion to many amateur ornithologists.

If you leave the canoe and explore the flora on foot with one of the guides always well trained and expert, you will soon have a good eye for details. Then the fabulously complex insect world draws attention: iridescent butterflies flutter around the visitor, stick insects use their camouflage tactics 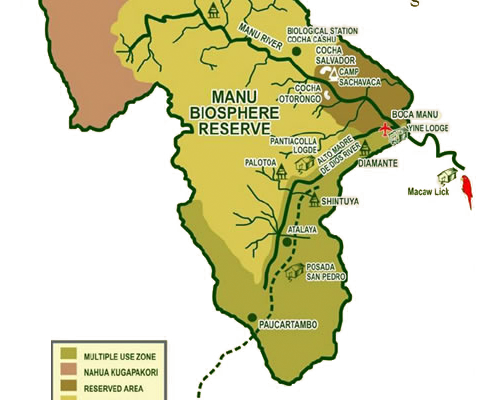 When Manu National Park was established by the Peruvian government in the 1970s, this form of ecological protection was the only way to ensure 100% conservation of the area. In principle, nothing has changed. Since then, the reputation of this area as one of the most diverse and valuable biosphere reserves in the world has only been consolidated.

Nevertheless, the natural gas project “Camisea” is now seriously endangering the Nahua-Nanti Reserve in the Manu National Park. There live as so-called “uncontacted peoples” not only the Nahua and Nanti, but also the Matsigenka and Mashco-Piro-Indians, for whom the forest is their only livelihood.

“Camisea” is Peru’s largest energy project. 75% of “Block 88”, one of the central sections of the Camisea project, is located within the Nahua Nanti Reserve. Already there explosions, oil and gas works have led to evictions and a reduction of the flora and fauna. If you want to engage with this form of natural exploitation, you can find more information here. 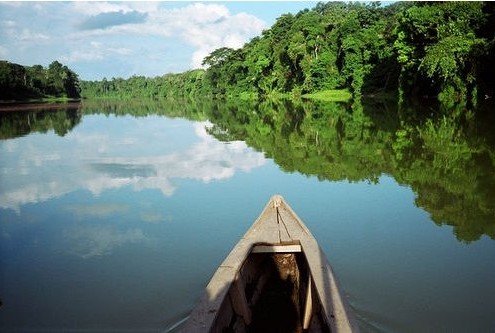 With local guides to the secrets of the rainforest

As mentioned, tourism in the Manu National Park is only allowed within the so-called “Experimental Zone”, and this only under the trained leadership of authorized travel agencies that strictly comply with park regulations. Independent visits are not allowed. Most leaders grew up in or near the park; Almost all boats are indigenous. The guided tours are in Spanish or English. Overnight stays in accommodations with different equipment or in camps.

Tours can be booked in advance either online or in Peru, for example, during a previous stay in Cusco. The foothills of the National Park are located four hours by car in Cusco. However, it can take up to two days by boat and car to reach the innermost point.

The tours extend for one or two days, but also for a week or more. Some of the volunteer shelters for injured animals also offer internships or project participation; Here is an independent Internet research useful. It is important to keep strictly as a visitor the rules of the park, which the guide communicates in advance. 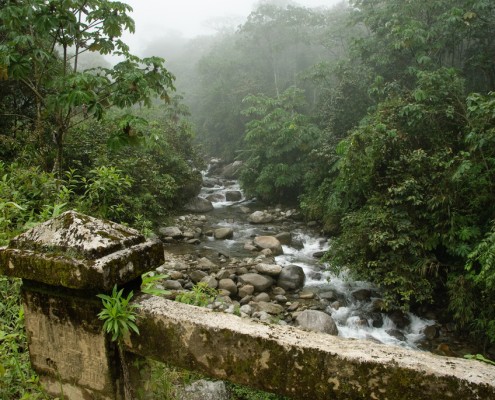 Actually, the whole year is a visit to the Manu National Park; Only in the rainy season, from January to the end of March, the trip can be problematic due to soggy soils, high humidity and landslides. A visit to the jungle is always an adventure, no matter how much has been planned in advance. In the biosphere reserves, the weather is the clock. Day and night activities of the animals and access to the areas depend on it. Therefore, there may well be short-term changes in routes and programs. But those who are prepared to embark on this organic rhythm will be able to share the most beautiful experiences.

You should not expect too much comfort in the cabins. Some are extremely simple equipped; they do not have electric light or a regular power supply. Although there is usually photovoltaic energy in the cabins to recharge batteries and batteries, but who wants to be safe, comes with charged spare batteries. Some cabins only offer common sections of shower and toilet without temperature control, which, however, according to experience, makes little sense with an average water temperature of about 25 ° C.

The walks are often several hours and can not always be done with hiking boots due to the humid earth that impregnates everything. Then, the tour guides provide rubber boots. If you can not run well on this, you should invest directly in waterproof trekking shoes. Waterproof backpacks and rain ponchos are always recommended; khaki clothing, slightly dry, also for bird and animal observation; Insect repellent; Sunscreen, LED flashlights and waterproof binoculars.

Related Links
For the protection of Manu National Park