The architecture of the Incas 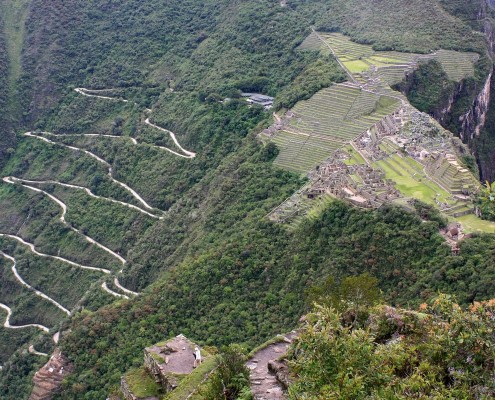 Machu Picchu – miracles on the mountain

Bearing in mind that Machu Picchu was built in 90 years, between 1450 and 1540, on a crest of the Peruvian Andes at 2,430 meters high by a town that knew neither the wheel nor the metallic instruments, this only borders a wonder of the world .

Most of the buildings of the Inca City were built with walls of different sizes, formed by stones stacked and accurately. The building blocks curl up so well without any use of mortar that they have survived the centuries without significant change or erosion. This technique of construction of ashlar or dry stone masonry was a specialty of the Inca architecture (not only in Machu Picchu) and not least due to the high probability of earthquake in the region, because the structures without mortar are significantly more resistant to the earthquakes.

The mobility of the stones – another mystery of Machu Picchu

Through the countryside of Machu Picchu run two Erdgewwerfungslinien; the Inca site is exactly between them. The cubes of Machu Picchu are therefore also known as “dancing stones”. When an earthquake occurs, the stones move in the rhythm of the earth’s motion, instead of rigidly opposing and breaking. Then they sit back in their original position to rest. Although the bright white color of the cuboid or the shimmering golden roofs survived the time – the architectural structure remained timelessly stable.

Through the countryside of Machu Picchu run two Erdgewwerfungslinien; the Inca site is exactly between them. The cubes of Machu Picchu are therefore also known as “dancing stones”. When an earthquake occurs, the stones move in the rhythm of the earth’s motion, instead of rigidly opposing and breaking. Then they sit back in their original position to rest. Although the bright white color of the cuboid or the shimmering golden roofs survived the time – the architectural structure remained timelessly stable.

If you take your time in Machu Picchu, you will discover a whole series of subtle design details along the dry stone walls: gently rounded corners instead of sharp edges, a slight tilt of the corners towards the center, and as a “L” cut ashlar to connect with each other Serve the corners of the wall. In general, the walls do not rise in a straight line, but are minimally displaced from one row to another. In summary, these apparent details have ensured the useful life of Machu Picchu over the centuries.

To this day, archaeologists and historians are fascinated by the fact that the Inca civilization apparently did not use any wheel to move the huge blocks of granite that form the walls of Machu Picchu. There is no indication that the wheel was invented as a means of transport, even though the Incas used the round shape as such in art. Also for the presence of metal and livestock tools as traction means for the construction of Machu Picchu to date no evidence was found. 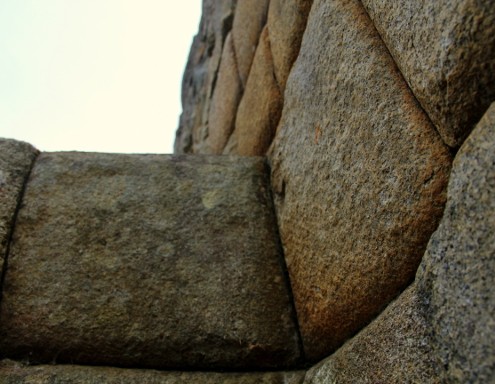 Between these stones, even after centuries no leaf fits

The shining white granite stones approached the ruins of Machu Picchu today, a granite vein that crosses the land. The semi-finished pieces found in the quarry, which are still open today, point to the production technology of the blocks. In the absence of metal tools, the Inca evidently fiddled with the stones with suitable smaller stones until a crack formed and the piece finally broke. This was then processed with smaller stones until it had the desired shape.

We do not know with certainty how the Incas transported the building blocks of Machu Picchu to their place. In question, there are two techniques that may have been combined. Or the stone was placed on several logs, wrapped in thick ropes and dragged with labor on the rotating logs to the place of use. Alternatively, the Inca could have taken advantage of the rainy season and soggy soil. On the wet and slippery surface, they could have dragged the stones on the paths cut without too much friction. One thing is true in both cases: they could only be achieved with enormous muscular strength and the help of thousands of men over the years.

In the place of their destination, the stones were raised and placed precisely using beams and wedge stones pushed between the stones. Only when two stones found the perfect position with each other, the levers were sanded or removed. In very few historically enlightening sites within Machu Picchu, you can still find cornerstones where this procedure was not completed, an exciting treasure hunt for any amateur archaeologist. 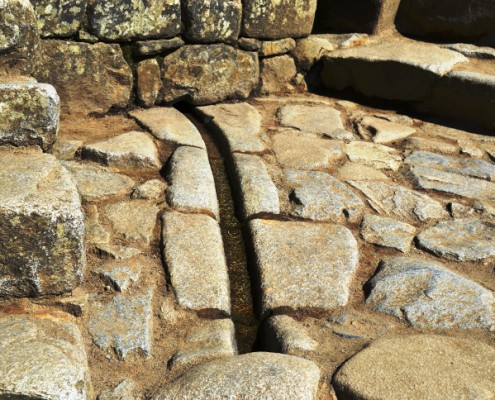 Water plays a central role in the architectural history of Machu Picchu. Already in the planning phase of the plant, three factors had to be considered in this regard. On the one hand, how should the continuous water supply of a city for up to 1,000 inhabitants and travelers be temporarily guaranteed? On the other hand, the builders of Machu Picchu had to make sure that the sometimes torrential rains were reliably derived from the mountain plateau. Last but not least, water, like all natural elements, was for the Inca a source of spirituality, which should pay tribute to the general image of the city.

It is very likely that the Inca, before clearing the trees and exposing the construction area, first looked closely at the locally available (and still flowing) Inca source: how productive was it and how much was the amount of water it transported? year?

His observations resulted in a hydraulically intricate and precise plan, according to which Machu Picchu is crossed by an incredibly sophisticated and sophisticated channel system. The channel has exactly the correct width and depth and with the proper course struck from the stones to capture the performance of the source. Its total length of 760 meters and the angle of inclination of three percent and the dimensions of the source that belongs to the system correspond exactly to the sum of the running water and the possible accumulation of rainwater. 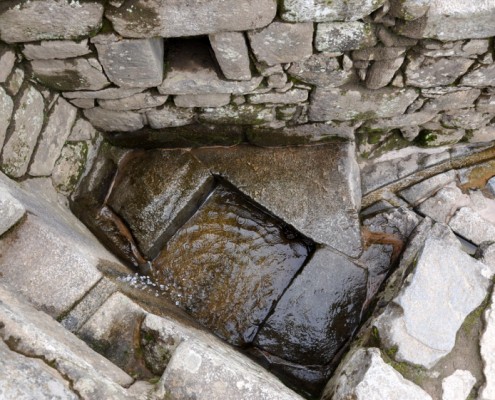 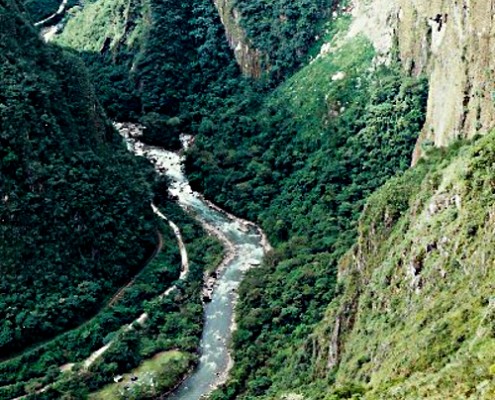 Take your time and walk through Machu Picchu with your ears open; because this sense has played an important role in the appreciation of the sacred nature of water for the Incas. Not only the water that flows must be omnipresent, reflected in the change of light, the sun and the moon. The constantly present melody of water that runs, falls, drips and flows also envelops the spectator attentive to each step. The echo of the Urubamba River wind at the foot of the mountain mixed with this concert of moisture that passed through the channel. Immediately outside the Machu Picchu site there is a rock that stands out, which has a special acoustic condition. Capture the sounds of the Urubamba River and amplify them with audible clarity.

Danger and Gift for Machu Picchu: The rainwater 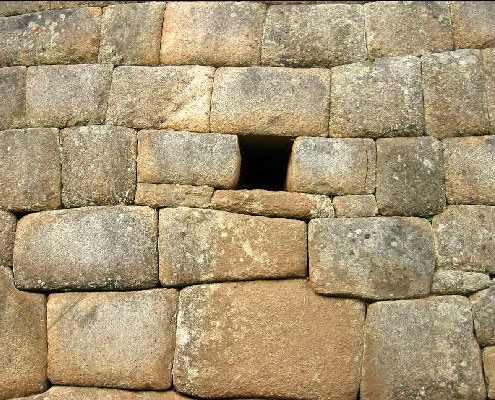 Rainwater was valuable in terms of supplementing drinking water supplies. At the same time, however, it also represented a potential threat to the entire Machu Picchu project, since the rains in this special place in the world could be massive. The roofs of the houses in the so-called urban section of Machu Picchu were made of rushes and laid to descend by pouring torrential rain to the ground. There, however, it was not allowed to accumulate, so as not to turn the land into mud and cause erosion. Therefore, the Inca had created some 130 drainage holes in the walls, which were obviously included in the planning from the beginning and were not inserted as a late occurrence for a disaster. But beyond that, a fundamental solution had to be found for the floods sent from the sky, so that not even the foundations of Machu Picchu were victims of them. Because despite the fact that the Inca government lasted only a hundred years: Machu Picchu was conceived for eternity; after all, it was a place of both gods and humans. In this sense, the effort is explained, with which one of the most sophisticated but also most elaborate drainage systems was created, which could be imagined: the terrace buildings.

The terrace system of Machu Picchu 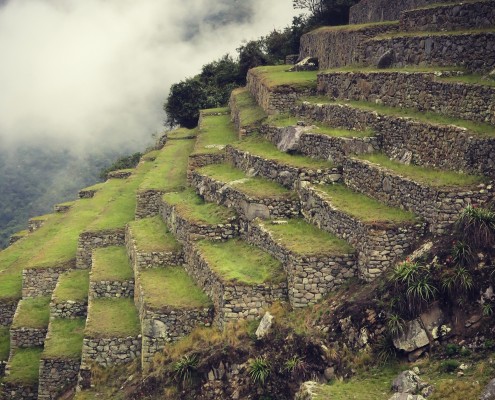 To this day the foundation of Machu Picchu

The impressive, visible from afar, around 700 terraces surrounding Machu Picchu serve several functions. First they had to be created because they served to stabilize the site in danger of landslide and at the same time they had to drain the torrential rains (impressive 1933 mm per year). Without this form of drainage, the entire terrain would regularly become a muddy landscape that would gradually destroy the entire complex.

Archaeologists have recently discovered that each of the average terraces two meters deep and three and a half meters high consists of several layers. The highest layer is the mother earth, mixed with small grains of granite as an aid to filtration and deep enough to be used also for agriculture. Then follow a layer of sand, then a layer of gravel and finally a layer of larger rocks. This allows rainwater to drip slowly into the ground instead of simply flowing down the slope of the surface and eroding the surface of the earth.

At the same time, the terraces were also used for the cultivation of plants and, therefore, for the partial supply of food to the Inca site. In the now grassy, ​​mother earth still has a high measurable nutritional content. It is probable that this has been transported at least partially from the valley. The nature of the plantation could have justified this effort: in addition to the ubiquitous corn and Cocapflanzen orchids and colorful flowers they were cultivated for aesthetic pleasure.

The two sectors of Machu Picchu 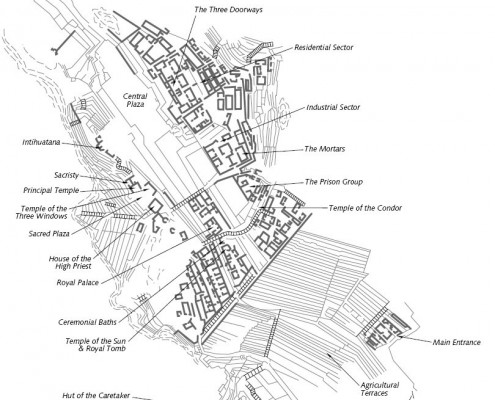 Not only on the terraces of the mountainside was cultivated at the time of the Inca in and around Machu Picchu. Machu Picchu is generally divided into two sectors: agricultural in the south and urban in the north. Both uses were only possible because Machu Picchu rests on a solid base. A true masterpiece of architecture, although almost completely invisible: engineers estimate that 60% of the entire Inca plant below the earth is out of sight. To make the wide plateau between the two mountains at once flat and solid, deep foundations were dug and filled with crushed stones. Their layers also served as drainage for the rain masses that would otherwise have literally razed Machu Picchu in the rainy season.

The agricultural land of Machu Picchu stretched along the slopes of the mountains on the terraces described. At the same time, Machu Picchu was connected to the valley and other fertile regions by eight trails and wide, well-secured roads. Also in this way a provision of the inhabitants with fresh food was assured. 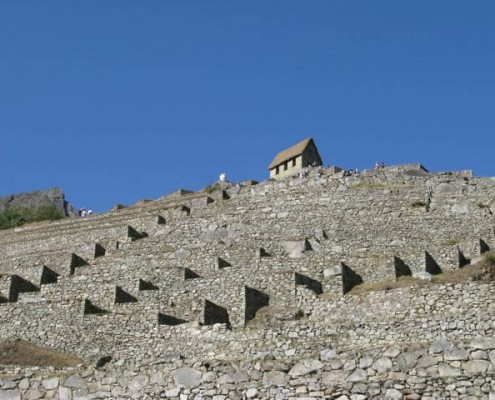 Within the city, the arable and urban areas were clearly separated by a 400-meter-long wall. Along the wall there is an additional ditch, which also served as a drain. Most likely, this is not an exclusion of certain sectors of the population or of the working class. Rather, the wall and pit were obviously designed as a possible system of protection against intruders; even the door in the wall is unusually reinforced.

The agricultural sector oriented to the southeast of the complex consists of a series of terraces of surprisingly variable shapes and sizes. The upper part comprises about 40, the lower part around 80 terraces. They intersect with a path that continues the Inka Trail from Intipunku.

From this fascinating building with its only three walls, not only the terraces, but you can easily inspect the entire area.

The architecture of the Incas