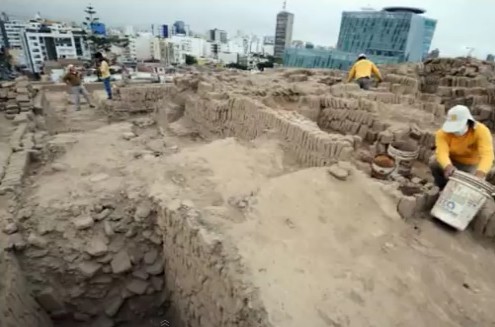 Archaeologists have found in the Peruvian capital Lima four over 1,000 year old graves in pyramid shape. The archaeological site is located in a densely populated residential area of Lima and should belong to the Ichma culture.

Excavation head Isabel Flores announced that these were the graves of four adults – three women and one man – who must have lived in the period of 1000 – 1450.

This would prove that the Ichma culture must have settled in this area before the Inca’s power. Isabel Flores, who has been researching district Miraflores for more than 30 years, says there are certainly more tombs to be found, though grave robbers and contractors are likely to have destroyed much of them.

The corpses were buried sitting and looking towards the sea, wrapped in handwoven textiles. Among them were burial objects such as ceramic pieces and weaving tools.

Whether gold, silver and other valuable items were found in the graves, but was stolen by looters, one can not say exactly – so that the position of the four bodies in the Ichma society is not yet clear. But the fact that a whole “Huaca” – the pyramid-shaped burial chambers – were built for them, suggests nobility.

Alone in Lima, more than 350 of these ceremonial tombs – also called Huacas in Quechua – have been found so far. And there are always new graves in the whole country. For archaeologists there is hardly a country that still has as many secrets as Peru.