Dominican Monastery of Lima: Basilica and Convent of Santo Domingo

The salmon-colored tower of the Basílica de Santo Domingo rises like an index finger between the surrounding low buildings. In the historic city of Lima there is an unusually high number of churches and monasteries. This is of course due to the special location of Lima: The Rímac Valley was by far the only area large enough to accommodate the capital. And so it was the only place where all the orders that had settled in Peru, to proselytize among the indigenous peoples, could find a place. Like some of the other churches and monasteries, the Basílica and Santo Domingo Monastery were founded in the same year as the capital itself. And like many other historic buildings, she suffered from the recurring earthquakes. The first church building of Santo Domingo was completely destroyed and rebuilt a hundred years after its completion. The monastery is famous for San Martin de Porres, America’s first black saint and the first Peruvian saint to spend much of his life there. The remains of the first Saints of America and patroness of Lima, Santa Rosa de Lima, are also in a crypt of the monastery.

Architectural characteristics of the plant

The restoration work was carried out in the style of the time, resulting in this mixture of different typical styles of Lima in one and the same building. Over time, the Peruvian builders also learned that they needed to maintain the lowest and simplest structures to give the buildings the necessary stability. The first tower had to be demolished after the earthquake of 1746. The current tower dates from 1775 and is built in the Rococo style. It has a height of 46 meters and is divided into three architectural sectors, making it a unique place in Lima. The lower part consists of two nested cubes, so it has the shape of an octagon. Mounted are two other elements. The walk-in balcony was added in the so-called Lima style. At the top, an angel with a trumpet announces the Last Judgment.

The equipment of the church interior

The ribbed vaults of the three-aisled church are constructed in such a way that the side windows allow in plenty of natural light. Particularly striking are the side altars with their neo-Gothic saints from the 20th century. In the lower part of the altars rest fragments of the bones of the saints. The artistically carved, wooden choir stalls date back to the 16th century and is one of the oldest in Lima. Miraculously, it survived the many damages.

The extensive monasteries consist of five cloisters, some of which are decorated with Sevillian tiles. The tiles imported from Spain presented the financial status of the Order particularly well. In the monastery there are several paintings that represent the life of the founder of the Order, Santo Domingo de Guzmán. In the garden there is a bronze fountain from the 17th century.

The church and the monastery are located at the northern end of the old town, not far from the Plaza Mayor. The monastery is open every day from 9.30 am to 6.30 pm, with guided tours in Spanish. Especially worth seeing is the library with the wooden paneled ceiling. The church is open every day from 08:00 to 13:00 and from 15:00 to 18:00. The price of the ticket is 5 soles. 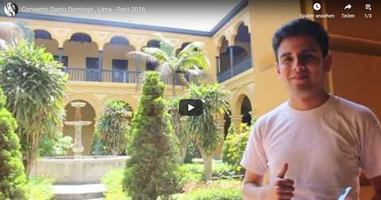