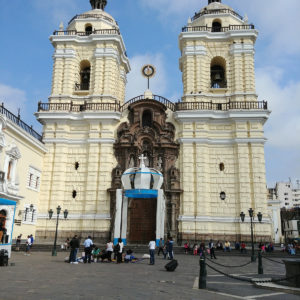 The San Francisco Church is just a few blocks from the main square Plaza de Armas. The façade as well as the two towers of the church are in Spanish Baroque style, the main portal is made of ornate granite. The church is one of the best examples of sacred architecture in Peru, characterized by its squatness and low altitude. As the earth is often hit by earthquakes, this is the only way to build stable buildings. Attached to the church is the Franciscan monastery. The church was consecrated in 1673, long before the complex was completed. In 1940, part of the monastery had to give way to a road. Therefore, it is no longer available in its original size. The monastery has a library of about 25,000 texts covering classical educational areas such as theology, philosophy, history, literature and music. Among them is the first Spanish dictionary of the Royal Spanish Academy and a Bible from the 16th century. They are written in different European languages. But also handwritten texts of the Quechua from the time before the Spanish colonization can be found there.

The architecture inside the Iglesia San Francisco

The vault and side aisles of the church are painted in Spanish Moorish style. Here, as well as in the wooden dome with Mudejar-style wood carvings, it shows the Muslim influence in Spain, which, like other European architectural styles, was imported into Peru. The main altar and choir stalls are carved in wood. A special jewel is the cloister of the monastery with seventeenth century Sevillian ornamental tiles.

The fact that the Bible is seen differently by each people and that the presentation of the figures differs depending on the country is particularly evident in Peru. In the refectory of the monastery there is a fresco of the Last Supper. That’s nothing special about such a place. However, if you look closely, you notice something strange: Guinea pigs, one of the culinary specialties of Peru, serve as food instead of a sacrificial lamb.

The catacombs of the monastery

Lima has a cemetery late. To give a place to the deceased, another solution was found: catacombs below the church. This network of corridors and vaults branches below the city and was used, on the one hand, to absorb the vibrations that arise from earthquakes; but, on the other hand, there were up to approximately 1808 between 25,000 and 30,000 people their final resting place. The bones were discovered and ordered in the middle of the 20th century. Today they are arranged in geometric patterns. They radiate a somber atmosphere, but they are, in a somewhat macabre way, fascinating.