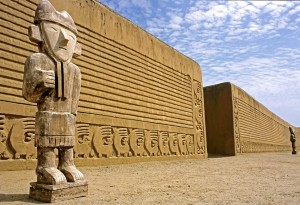 If you visit Peru and travel along the Pacific coast, you should definitely plan a visit to Chan Chan, located about five kilometers west of the city of Trujillo, not only because of the impressive craftsmanship of the buildings and the rich historical architecture of the complex, but also because Chan Chan was one of them in danger of extinction. World Cultural Heritage of UNESCO (“List of World Heritage in Danger”). Although a ten-year plan is to stop the continued decay of these unique ruins, their survival is uncertain.

Chan Chan was the capital of the Chimu civilization, which dates back to around 850 BC. BC flourished until 1470. The mud city today covers an area of ​​approximately 28 square kilometers, but was perhaps much more extensive when it was built around 1300, including all the land adjacent to it. This made Chan Chan the most extensive urban area in South America during its heyday. At the same time, Chan Chan was the largest clay city in the world.

Chan Chan was made up of tens of thousands of buildings surrounded by walls nine meters high. Each one was built with sun-dried clay bricks. Above all, the walls of the palaces and temples were decorated with detailed frescoes that can be tens of meters long.

Water: Artfully supplied and the ultimate in pressure

But as rich and artistic as Chan Chan and as generous as it was the preferred building material, a crucial resource was its location in the Peruvian desert absolutely scarce: water. You can not trust an annual rain. But a sophisticated irrigation and sewer system channeled the precious wet water of the Chicama River, the ocean and the subterranean waters further away into the city, transforming it into a livable oasis of fertile farmland and gardens.

However, the water supply finally turned out not only as a logistical vulnerability, but also a military one. Around 1470, the Inca ruler Tupac Inca Yupanqui decided to subjugate the Chimú, only 50 years before the Spanish conquered Peru. (Ironically, we owe a lot to the latter because of the Chimu culture, since Spanish chroniclers could still talk to the witnesses who had lived before the Inca campaign). But as fragile as it seems to us today Chan Chan, the city proved to be so resistant to armaments try to the Inca, take them and defeat the Chimú. Therefore, the conquistadors resorted to a ruse to reach their destination: they cut off the city’s water supply by blocking and diverting supplies. The weakened by the water shortage population that would soon arrive soon overflowed easily.

With the conquest of the Inca, Chan Chan soon lost its brightness and meaning. Although the conquerors did not destroy them, their vibrant capital life was a thing of the past, among other things because the Inca forced many of the Chimu artisans to leave Chan Chan to devote their skills to the design of their own capital, Cuszco.

When the Spanish conquistador Francisco Pizarro shortly after, around 1532, invaded Chan Chan, the city was almost completely deserted. However, records of the conquest still report valuable metals embedded in the walls and the lining of entire walls, and, of course, quickly eliminated and removed by the Spaniards. In Chan Chan, the Spaniards, through ruthless drilling and the excavation of valuables, created destruction throughout the area that left only the clay buildings and some ceremonial rooms.

The great destroyer of the present: El Niño

El Niño is an environmental anomaly that caused rain damage to the clay constructions that were already in the heyday of Chan Chan, which occurred only every 25 to 5 years and could be quickly repaired by the inhabitants. However, for about 150 years, El Niño has been reversing the normal weather conditions of the Peruvian coast, at intervals of two to seven years. This leads to regular storms of rainstorms, a climatic phenomenon that was previously completely unknown in the constantly dry and warm area. Precipitation and violent winds are extremely destructive to clay constructions, as is already clearly visible in many places in Chan Chan. 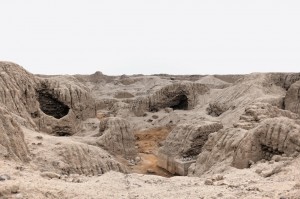 This is why UNESCO not only declared Chan Chan a World Heritage Site in 1986, but also included it in its “Red List” of World Heritage in Danger. Because not only El Niño represents a serious problem for the conservation of Chan Chan. At the same time, geologists observe an increasing increase in groundwater. In addition, there are illegal settlements on the site’s grounds.

Yet (and hopefully for a long time, if the ambitious government-UNESCO rescue plan described below is implemented), Chan Chan is well enough to be worth a trip. 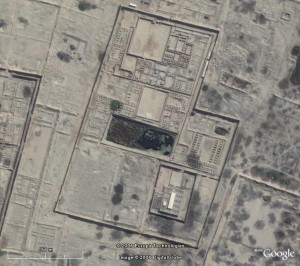 The complex is divided into nine to ten, originally independent districts, which were successively ruled by successive rulers. The tombs found in the various districts, filled with jewelery, precious ceramics and dozens of skeletons of young women testify to a cult worship of these leaders.

Protection for buildings in Chan ChanStar one of the so-called Chimor rulers, his successor did not move into the already existing magnificent buildings of his predecessor. Instead, they were sealed along with all the graves (and most likely, the surviving elite were killed before). The new monarch had to build his own quarter for himself and his entire administration. The result is the various complexes that give Chan Chan his idiosyncratic architectural structure.

The Tschudi area (named after the Swiss researcher Johann Jakob von Tschudi) has been artfully restored and made accessible to the visitors throughout the course.

Here you can admire some of the preserved ballrooms up close. For a long time, a special glaze made from distilled water and cactus juice (an ancient Chimú recipe) was enough to preserve the remaining clay constructions in order to protect them from destruction. In 1998, the El Nino phenomenon became so pronounced that steel scaffolding was built around the hall ruins to protect it from erosion.

The Chimú lived exclusively on the north coast of Peru, in a relatively narrow desert area between the Pacific and the western foothills of the Andes. The sandy plain was intersected by short rivers that began in the rain-soaked mountains, creating green oases, either natural or through artificially redirecting the natural course of the river.

The Chimús lived on fishing and agriculture. Unlike the Incas following them, they worshiped the moon more than the sun; The sea and its inhabitants also played key roles in their legends. Various archaeological finds bear witness to the rituals and sacrificial rituals associated with this worship – such as recurring shells, which were associated with the riches of the oceans, the rare rain and fertility, and probably also served as a means of payment.

The Humboldt Current drove such nutrient-rich water off the coasts of Peru, that there was a worldwide unique diversity of species of edible marine life and plants. For the Chimú, these maritime riches were gifts from God, more than compensating for the country’s relative drought – and they were repeatedly paid tribute to their ceramics through depictions of fish and crustaceans.

Because above all, the Chimú were famous for their precious metal processing in copper, gold, silver and bronze and their impressive pottery. Unique is the shiny, black color of the ceramics, which were produced by a special combustion process in the absence of oxygen.

The precious metals also represented the strictly hierarchical structure of the Chimú society, which fed on its founding myth. This provided that the sun had created the earth by laying down three eggs: a golden as origin of the leading elite, from which also the rulers sprang; a silver for their wives and lovers; and a bronze, from which the rest of the population developed. This strict hierarchy is also reflected in the architecture of Chan Chan, with the artisans and architects, as well as the priests, apparently also occupying an outstanding place in the classroom. 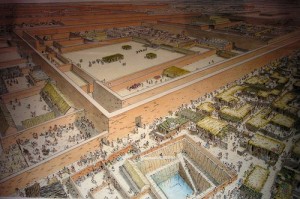 An impression of the hustle and bustle in Chan Chan – before the Incas and Spaniards came
Theoretically, it would be possible to roam all over Chan Chan. But the various stages of destruction have reduced most of it to washed, bare mud walls. If you have little time or want to get an immediate impression of the splendor of the complex, you should actually concentrate on the carefully restored part of the Tschudi complex.

This one is already extensive enough. It was built as one of the last urban sub-complexes and is characterized by still preserved, beautiful clay reliefs.

However, the further you move inward to the living areas, the large squares of the Tschudi complex are gradually less ornately decorated. This was also due to the function of the frescoes as “show objects”: Last but not least, they were to impress visitors, who did not penetrate the more private facilities. 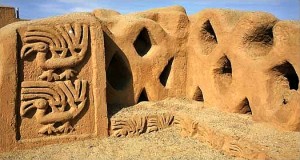 Also interesting are the traces of those areas that were used for administrative purposes and to handle taxes. As the capital, Chan Chan was also the place where the representatives of various parts of the kingdom of the kingdom had their tribute. For this special rooms seem to have been reserved, in the small chambers were already incorporated for the storage of the gifts.

Since many people had to wait and negotiate in the heat at these gathering sites at the same time, the Chimú devised a complex ventilation system – they provided the walls with “breathing holes” in the decorative form of fishing nets. Between the various areas ran corridors that finally connected the area of ​​the king and the elite with the official rooms.

Here is an example of the intelligent water supply in the form of a deep pool below the groundwater level.

For the first visit the booking of a tour of the terrain is recommended. Otherwise, many beautiful spots remain undiscovered and you spend too much time walking along washed-out mud walls that are not really fascinating. Between the individual areas, taxis also drive back and forth, which are very reasonably priced. Also, not all segments are accessible for tourist visits.

If you are interested in the craftsmanship of the people of Chan Chan, you should plan a visit to the small Chan Chan Museum. There is a collection of famous pottery works and some exhibits on the history of the city. Two other attractions are the “Huaca Arco Iris” (Rainbow Temple), named after the arched, beautifully restored frescoes on its sides, as well as the platform-made “Huaca Esmeralda”, which is still waiting for its restoration.

The entrance tickets available at the entrance cover all these attractions, are valid for two days and only cost a few euros. To get to the entrance from Trujillo, take the local buses called “Combis”, which run every fifteen minutes.

Within the complex, a number of leaders are waiting to show you the complex for about five dollars an hour. However, you can already book an organized tour in Trujillo, which includes the transport, but not the entrance fee. 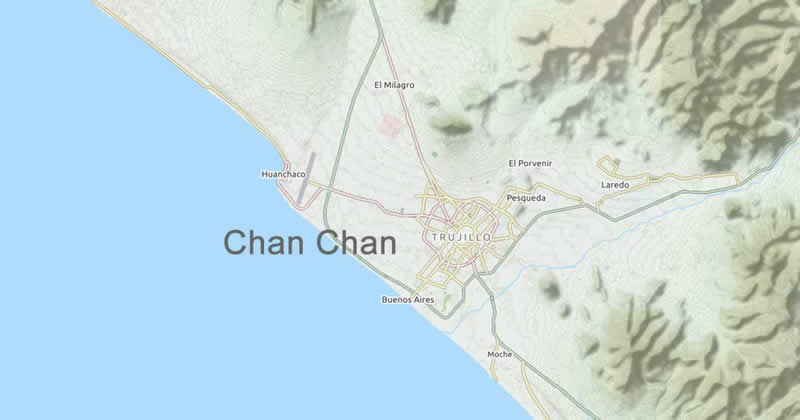 Chan Chan is warm to hot all year round. The coolest months are from June to September with a minimum temperature of 24 degrees. Due to the coastal location, the precipitation in Chan Chan is very low. 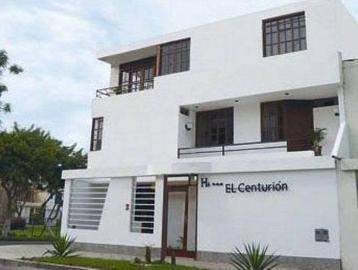