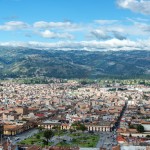 Cajamarca, where once the last hour of the Inca Empire arrived, now becomes a colorful show every year in February and March, when the carnival arrives. But for the rest, Cajamarca is known far beyond its city limits: for its Inca baths, its thermal waters and for its picturesque surroundings. Oh, and for the dozens of baroque churches and colonial buildings that you can not find anywhere else in the country. In Cajamarca, the Inca tradition is mixed with the influences of Spanish colonization, creating a unique atmosphere.

The end of the Inca

Here in Cajamarca was where the Inca ruler Atahualpa installed his camp after his victory in the Civil War of 1528-1532 against his brother. But he could not enjoy this victory for long, because in the same year the Spaniards had to submit to the leadership of the Spanish conquistador Francisco Pizarro and arrest Atahualpa in the Battle of Cajamarca. What followed next was the inevitable and tragic decline of the Inca Empire, combined with the entrance of Catholicism.

The soil in this region is extremely fertile, so many vegetables and fruits are grown here. But also the herds of cattle can eat well enough in the green meadows. Therefore, not only the meat of Cajamarca is considered a real delicacy, but also milk and cheese products are very sought after. Especially the “Manjar Blanco”, a kind of spread of milk, sugar and vanilla, is legendary.

The churches of Cajamarca

Directly on the Plaza de Armas (the main square of the city) is the Cajamarca Cathedral, where once stood the courthouse of the city. Built in 1665 (rising from the temple to the cathedral in 1682), the building rises to the sky and is perhaps the most striking example of Peruvian Baroque. The altar inside is hand-carved and covered with fine gold leaf.

The San Francisco church from 1699 is also a fine example of Cajamarca’s baroque architecture. Here, in 1952, a secret entrance was found under the altar, leading to dark catacombs where numerous tombs were found by Franciscan friars and nobles. The church also has a monastery and a museum of religious art.

Directly in the Plaza de Armas (the main square of the city) is the Cathedral of Cajamarca, where once was the city court. Built in 1665 (which rises from the temple to the cathedral in 1682), the building rises to the sky and is perhaps the most notable example of the Peruvian Baroque. The inner altar is carved by hand and covered with thin gold leaf.

The San Francisco church of 1699 is also a good example of the baroque architecture of Cajamarca. Here, in 1952, a secret entrance was found under the altar, which led to dark catacombs where numerous Franciscan friars and nobles found numerous tombs. The church also has a monastery and a museum of religious art.

Only 7 kilometers outside the city are the thermal baths Cajamarcas, the Baños del Inca. Legend has it that Inca ruler Atahualpa bathed exactly here when the first Spaniards invaded Cajamarca. Today you can not only visit the old hot baths, but also relax in (much more modern) thermal baths, treat yourself to a massage or book other spa treatments. The prices are very cheap (for example, 20 soles for a half-hour massage). Incidentally, a visit to the Inca Baths is most beautiful when the sun is rising and the lighting creates a magical atmosphere.

Another popular destination is the archaeological site of Cumbemayo about 20 km southwest of the city. A more than 1000-year-old aqueduct and numerous cave paintings take you back to a forgotten time. The site is in close proximity to an impressive rock formation, which is also called “the great monks” due to its human-like shape.

In the region it is always pleasantly warm and sunny with an average temperature of about 23 ° Celsius – so it’s worth a visit all year round.

The Costa del Sol’s Wyndham Cajamarca invites you to relax and unwind with its tranquil courtyard pool, restaurant, bar and, of course, free Wi-Fi. Another advantage: it is located directly on the Plaza de Armas, so you are right in the middle of everything in the action and most attractions can be reached on foot. For excursions outside the city, by the way, the shuttle combos, which can be found here. They often cost only a fraction of what you would pay for a taxi. If you want to travel by bus through the world-famous Panamericana, you have an 18-hour trip from Lima. But, after all, there is a stop in Trujillo at the right time and very beautiful, where you can strengthen yourself.
Cajamarca has its own (small) airport, which is regularly served from Lima. The flight takes approximately 1 hour and 15 minutes.