Archaeological finds in the Pucuncho basin 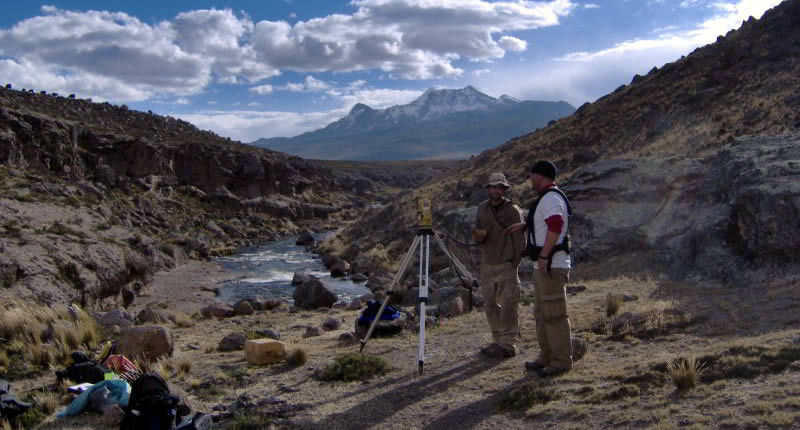 In the southern Andes of Peru, an archeology team has discovered the highest human ice age settlements in the world with the participation of researchers from the University of Tübingen and the Senckenberg Center for Human Evolution and Paleoenvironment (HEP).

In October of last year, there was a small sensation in Peru, at least in archaeological circles. A team of researchers from the USA UU., Germany, Canada and Peru discovered the highest settlements of glacial peoples in the Pucuncho basin in the southern Andes. The two sites, Cuncaicha and Pucuncho, are about 4,300 meters above sea level, which makes them the highest in the world, at least for now.

But why is this discovery so important? Well, on the one hand, these two settlements of the Ice Age are almost 1,000 years older than previously known and, on the other hand, it was assumed that only a genetic change was needed, until the Peruvians could live in those heights.

Perfectly adapted to the environment

Today’s inhabitants of the Andes have optimally adapted to life in extreme heights. Their metabolism works faster and does more, they have greater lung capacity and a higher hemoglobin concentration in the blood, which helps to bind oxygen. So, in contrast to the average person, they are much better equipped to manage with less oxygen.

The researchers on the expedition team, which included members of the University of Maine, the University of Calgary and the University of Tübingen, are not sure if the inhabitants of Pucuncho and Cuncaicha were already well prepared for life in the mountains. But the findings at least suggest that the residents lived, hunted and worked here for a period of time. The only question is: were they already perfectly adapted then or were they the last centuries of the ice age here in the Andes at least milder than previously assumed?

Pucuncho, the first site, is at an altitude of 4,355 meters. Here, archaeologists discovered 260 stone tools, some of which were up to 12,800 years old, including cartoons and butchery tools.

The second site, the Cuncaicha Rock, provided researchers with numerous tools and other objects that humans used here 12,400 years ago. The rocky ledge formed a natural blanket and protected the inhabitants from wind and weather. The soot stains on the rocks indicate that they used this place as a storage and kitchen facility.

Many of the tools found were made of obsidian, andesite or jasper, which can still be found in the Pucuncho basin area today. The research team led by Dr. med. Kurt Rademaker of the University of Tübingen concludes that the inhabitants of this inhospitable region are completely on the hunt. There were no signs of crops, or even natural food sources.

The inhabitants are probably fed by guanacos and vicuñas, both relatives of the camels, as well as by Andean deer and later llamas and alpacas.

Difficult conditions under the most extreme conditions

Only 2,000 years after the first humans arrived in South America, they were unfortunate. Even today, the trip is hard and arduous. You have a bit of luck to enter the area of the two ice age settlements, you have a donkey for the team. If not, at least you want to have muscle pain.

And the climatic conditions are always at the limit: extreme ultraviolet radiation, the sudden snowstorms that appear from nowhere and the sharp drop in temperature during the night. And then it will be even more pronounced. However, the researchers assume that the inhabitants of Pucuncho and Cuncaicha passed here at least part of the year. However, pieces of debris from deep levels found during the excavations indicate that a walk has taken place.

Always on the hunt

But why did people ever settle in this inhospitable environment? The answer is obviously obvious: they followed the diet. Geologists have since shown that the area around the Pucuncho basin was free of glacial glaciers about 15,000 years ago. And where there is no ice, life can flourish in the form of lush green grass. And where the food is, the animals are not far away … and therefore also the people that feed on them.
According to anthropologist Tom Dillehay of Vanderbilt University in the United States, discoveries of settlements such as Monte Verde in southern Chile (14,500 – 14,250 years) or Quebrada Jaguay on the Peruvian coast have been understood earlier about the expansion of settlers to the island. He turned his head.
And who knows what researchers and archaeologists will find in their next expedition, because so far, only a small part of the highest areas of the Andes has been properly investigated.